This plant has sometimes been called New Jersey Tea (never in Idaho, though), and it’s also called Buckbrush.

In my region, Buckbrush leaves are shiny and very fragrant and the flowers are like frothy foam. It is a member of the Buckthorn family which also includes Cascara and the Chinese Jujube tree, and is native to the Americas with a range spanning from Guatemala to Canada. Indigenous Peoples use includes treating arthritis and influenza and as an astringent. Early American herbalists used the herb to treat enlarged spleen, and as an expectorant, anti-spasmodic and anti-syphilitic.

Buhner says Red Root is “first and foremost a lymph-system stimulant and tonic”. It clears dead cellular tissue from lymph fluid. It is specific to swollen, infected or inflamed lymph nodes, tonsils, spleen, appendix and liver, possibly enhancing the production of lymphocytes. Red Root is anti-inflammatory to the liver and spleen, and a tonic to the mucous membranes. It helps tone, modulate and protect the spleen from microbial damage. Some clinical observations of AIDS patients showed an increase in T-cell counts, and Red Root may stimulate lymph drainage in the intestinal walls.

Red Root is indicated in Lyme disease as its co-infections, mycoplasma and bartonella, congest the spleen. The standard dose according to Buhner is 30-90 drops 4x @ day, starting out with a lesser amount and working up to what is comfortable. 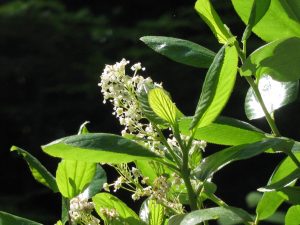 Tilgner says Red Root is specific for reducing cysts, and considers the herb to be most useful in subacute and chronic conditions. Two specific components in the root – Betulin and Betulinic acid – are active as anti-inflammatory, anti-tumor agents as well as modulating the immune system. Another component, Ceanothane, is anti-staphylococcal. Buhner notes that the flowers are active against Staphylococcus aureus, which is particularly resistant to pharmaceutical antibiotics. A strong tea or diluted tincture can be used as a gargle for tonsillitis. The herb has also shown anti-fungal activity in vitro.

Although Red Root is a blood coagulant and should not be used while taking prescription coagulants or anti-coagulants, the tincture has been used for treating heavy menstruation at the rate of 10-15ml (2-3 teaspoons) per dose of 3x/day. There have not been any other negative side effects observed, however, as with most herbs, do not take during pregnancy unless recommended by a health care professional. 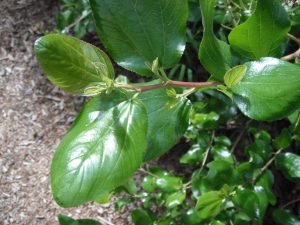 Ceanothus leaves – see how shiny they are?

For those of us with math issues, 1 teaspoon = 5ml. (milliliters). There are approximately 40 drops per 1ml. of tincture.