Schizandra has been called “…one of the 50 fundamental herbs of Chinese medicine” by Stephen Buhner and is considered an excellent tonic and restorative on many levels. Schizandra  is native to many parts of Asia, has numerous cousins, and has been traditionally used for over four-thousand years.

Schisandra chinensis is sometimes called Chinese Magnolia Vine or Sandra Berry. It is also known as 5-Flavor Berry, “Wu Wei Zi”, because it possesses all the five flavors of sweet, salty, sour, bitter and pungent or spicy. Schizandra nourishes what is called The Three Treasures to sustaining human life: Jing (essence), Qi (chi, or life energy) and Shen (spirit); and it opens the meridians to allow for the flow of Qi. This herb has been extensively studied around the world and in Russia it is included in the national pharmacopeia (they even put it on a stamp). 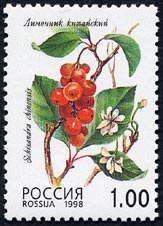 Schisandra is classified as an adaptogen, which means that it helps the body adapt to stress, produces a normalizing effect on the workings of the body, and does not disrupt normal body functions. Considered an adaptogenic sedative, schisandra allows the system to cope with both internal and external stressors, and can sometimes provide a general mood-elevating effect. It supports concentration and alertness and increases mental efficiency and general strength.  Schisandra has been used as a tonic for the treatment of mild depression, irritability and memory loss. It is often combined with Rhodiola (R. rosea) and Eleuthero (Eleutherococcus senticosus) as a super-adaptogenic trio.

Considered anti-viral in nature, schisandra is traditionally indicated for weak lungs, liver and digestion and for general coughs, and it has been used for respiratory infections and non-specific pneumonia.

Another benefit of schizandra berry is its anti-oxidant and immune-modulating properties. It has been shown to enhance and protect neural tissue and cell mitochondria (cellular “sparkplugs”), which fuels our own energy.  Multiple studies of the seed extract as well as up to 30 different lignins indicate the value of this plant in the treatment of liver and lung cancers, often by the inhibition of cell mutation and proliferation. Extracts of schizandra have been shown to reduce liver enzymes and  used for treating hepatitis, especially HVC.

Schizandra can help clear inflammatory skin conditions such as acne and psoriasis. A simple tea or watery extract can be applied externally to wash irritated skin. These skin-restorative properties refer to the use of schizandra as a liver tonic.

In addition, this pretty red berry that hangs in clusters like grapes from a vigorous perennial vine is traditionally considered a sexual stimulant, providing over time a general sensation of warmth in the genitals as well as an increase in fluid secretion or, perhaps more daintily, “female elixir”.  It has shown to improve blood circulation, improve digestion and reduce night sweats and insomnia.

Schisandra berries up close and personal

Many of the studies on schizandra, especially concerning cancer treatment, used seed extracts or specific lignins, which are much more concentrated than a simple fluid extract. Nevertheless, prevention and pro-action are the best medicines. The function of a tonic is to gently tone over time, and the action of an adaptogen is that it encourages and allows the body to lower what is elevated or support what is diminished, back to a middle ground where a person can “go with the flow” again and find balance. Who can argue with nourishment spanning four millennia?

Dosage for using Schizandra Berry Tincture 1:5-70% as a general tonic is 2-5ml/½ – 1 teaspoon/ 20-30 drops daily. Schizandra should not be used during pregnancy.