After all, what is a Hawthorn… a shrub? a tree?

Although the black hawthorn tree – Crataegus douglasii – usually grows like a large shrub, with many suckering stems arising from the ground, here in northern Idaho there are huge tree-like specimens on the islands in the Clark Fork River near where I live. Back in 1976, the state champion down near the Clearwater River had a circumference of 64 inches, which is quite large for a shrubby tree. Hawthorns have one- to two-inch thorns that like to ferociously reach out and grab you, pulling at your hair and tearing holes in your sleeves; similar to blackberries, the wild fruit is not necessarily free for the picking.

Every Haw has its Thorn

Belonging to the vast Rosaceae, or rose, family, this shrubby tree of the temperate zone is cold hardy and a good bird tree, with many ornamental varieties available to the home gardener. Bees are known to cover the flowers, you can sometimes hear the trees a-hum with them. The fruit has been used to make jam and liqueur.  Here is a website to help you make the fun stuff:  http://www.danish-schnapps-recipes.com/hawthorn.html The wood is so dense that charcoal made from it is supposed to burn hot enough to use in a smithy’s forge. 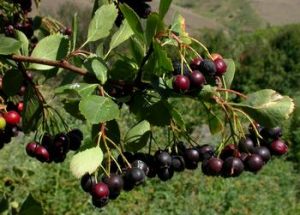 The fruit is called haws, from an Old Saxon word meaning “hedge,” and refers to early hedge plantings of hawthorn common in medieval Britain; perhaps this is what Prince Charming had to hack his way through to rescue the Sleeping Beauty from her fairy-tale coma. Some early Christians believed this tree supplied the crown of thorns placed on the head of Jesus at the crucifixion, but this is unlikely because hawthorns do not naturally grow in the Middle East. Perhaps because of the association, some folks during the Middle Ages believed that bringing hawthorn into the home would cause a family member to die. In her book Common Herbs for Natural Health, herbalist and world traveler Juliette de Bairacli Levy says that European Gypsies gathered hawthorn to encourage the fey folk to visit. Celtic legend relates that where the triad of oak, ash and thorn grow together, one may see the faeries. Hawthorn has been associated with the sixth moon cycle of the year, which is one reason why it is also called “May”. (Remember that while there are only twelve months in the Gregorian calendar year, there are thirteen lunations, or moon cycles.) On May Day, or Beltane as it is sometimes called, Cornish folk would deck their doorways with flowering branches of hawthorn to herald spring. An old beauty charm instructs us to wash in the dew of hawthorn blossoms at dawn on May Day to make us “ever after handsome be.” What could it hurt? 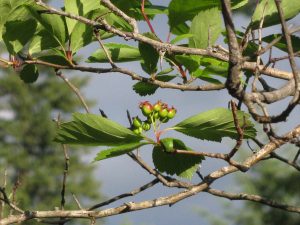 Now, to the Heart of the Matter

What better way to encourage good looks than to encourage good health? The quiet magic of hawthorn is that it is a very gentle nervine, and can be taken to reduce heart palpitations associated with menopause (especially when combined with Motherwort, Leonurus cardiaca); hawthorn berry syrup is a good remedy for over-tired children.

Most notably, however, hawthorn is a subtle heart tonic, strengthening weak conditions and easing excessive conditions. It is a cardiac tonic jack-of-all-trades in a manner of speaking, and can also be considered an adaptogen, certain herbs that help the body adapt to stress as well as exert a normalizing effect upon the body’s normal processes. A study commissioned by the German Ministry of Health found that hawthorn improves contractions in the heart muscle while in turn dilating the heart. Hawthorn helps reduce the incidence of angina. It mildly dilates the blood vessels and lowers blood pressure. Hawthorn is not a direct medicinal; it offers a gradual toning of the heart muscle, with the bonus of increased oxygen utilization. Hawthorn berries, and to greater extent the leafy flowering tips, contain antioxidant flavonoids, which increases coronary flood flow, improves circulation and improves the function of the heart in general. Hawthorn protects collagen fibers and reduces cortisol.

There are no negative side effects from using hawthorn, however, you should not take it without supervision if you are currently taking the following drugs because of their similar actions: digoxin, beta-blockers, CCB’s (calcium channel blockers), phenylephrine, ED medications, and nitrates. http://umm.edu/health/medical/altmed/herb/hawthorn 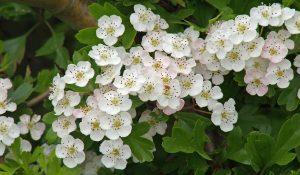 Hawthorn flowers in full bloom – they do not smell very sweet

Here at The Wild & Weedy Apothecary we offer a Hawthorn Compound Tincture, which is an organic alcohol-macerated blend of wild-crafted, spring-harvested flowers, including the leafy little branch-stem to which they are attached; and the fall-harvested berries, which has to happen before all the birds and squirrels get them! Then the two single-herb tinctures are combined to make a superior tonic compound. We have discovered that hawthorn is used far and wide in Britain and Europe with much support from both the herbalist community and the medical community in general. This is the compound that we take ourselves as a preventative, since heart disease runs in Doreen’s family and we like butter and cheese. The choline in hawthorn helps break up fat into tiny molecules so it passes through arterial tissue easier and reduces the buildup of cholesterol.

“Numerous randomized, placebo-controlled clinical trials report hawthorn’s ability to improve exercise capacity, alleviate symptoms of cardiac insufficiency, and treat mild to moderate congestive heart failure (CHF), the area of the most research.”  – from Hibiscus, Hawthorn, and the Heart – Modern research supports the use of traditional plants by Tori Hudson http://www.naturalmedicinejournal.com/journal/2011-07/hibiscus-hawthorn-and-heart

While neither of us are physicians or even medical herbalists, we wanted to include information about hawthorn and the heart, and include the tincture in our repertoire, because it is very mild and slow-acting, and not directly medicinal like foxglove for instance. However, although hawthorn is mild, it is also deeply active in that it can make some real lasting change that is guided by our own body’s individual need. As a simple beverage tea, hawthorn probably won’t affect the heart much except to allow for the condition of normalizing optimum function, and even this occurs only after using it regularly over several weeks’ time; in other words, it’s very safe. Hawthorn berry tea also tastes good, which is reason enough to drink it, and who couldn’t use a good tonic in the spring?

A final note from Doreen –

I think She and me have a special rapport, a sort of mutual communion. Sipping tea in the early morning, spying robins as they listen for grubs and worms, catching the sun’s warm fingers peeking over the ridge – all are good medicine for the heart. It’s a peaceful time of day, perfect for contemplation. The branches of the hawthorn tree are a good place to leave prayer ties. I am never surprised when Granny Whitethorn decides to snag a piece of my shirt for her own tie. 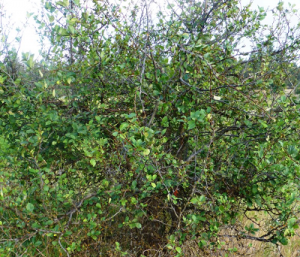