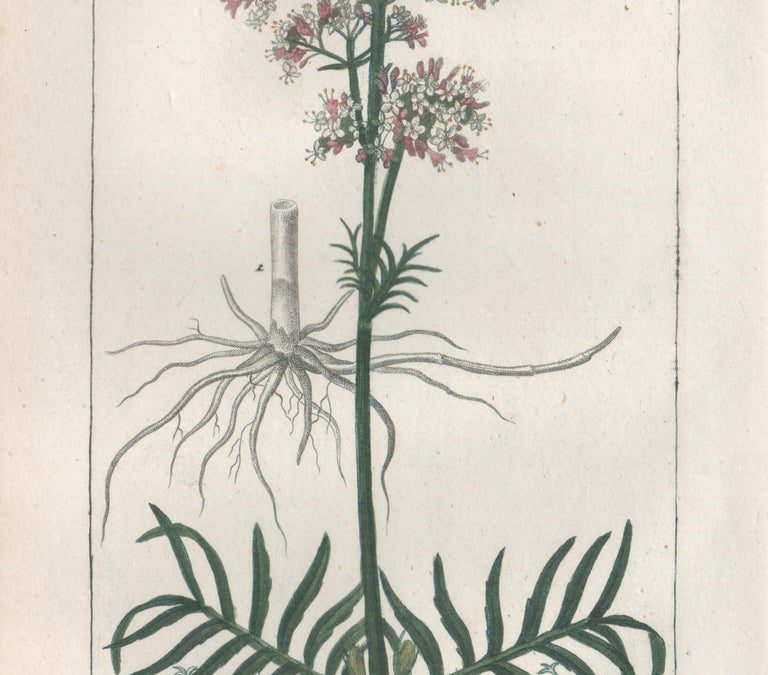 VALERIAN root – Valeriana officinalis –  has a long history of herbal use. For instance, the people of Russia have been using it for over 2000 years. Native to Europe and western Asia, this plant of the honeysuckle family is a delicate-demeanored, leafy herb up to 5ft. tall with hollow stalks and sweetly fragrant, small pink, white or pale lavender flowers, all of which hides a dank, dark secret… dried Valerian root smells like dirty gym sox!

The word Valerian has been in use since about the 10th century, and derives from the Latin valere meaning “to be strong, healthy”. Herbalist and astrologist Nicholas Culpepper was recommending it for cough in the mid-1600s combined with licorice, raisins and aniseed, and indeed that is a good way of using valerian root. Part of the National Formulary until 1950, this herb is sedative and anti-spasmodic. All clinical herbalists and root-grannies are in agreement here. Valerian root is the most widely used sedative in Europe, and that includes prescription. In Russia, where herbs are researched as par for the course, Official Medicine using valerian root includes treatment for nervous anxiety, migraine, seizures, menstrual cramps, and other spasmodic conditions. The Commission E board of health in Germany considers valerian tea safe to drink freely throughout the day as needed for anxiety and nervous tension, even for pregnant women (that is tea, not tincture). Of course, this is no secret to us here on Turtle Island either: there are also a few native species of valerian that have substituted for the naturalized variety brought over from Europe.

The whole is greater than the sum of its parts. Valerian root extract (tincture) is more effective than any singular derivative or constituent. The volatile oils, iridoids, sesquiterpenes and alkaloids are all fine and dandy, but it all boils down to that stinky gym locker smell no matter what. And that’s what makes valerian your friend with the big shoulders.

Soldiers returning from WWI were treated with valerian root extract for the condition then known as “shell shock”. We now use the term post-traumatic stress disorder (PTSD) and have come to realize how very many people are afflicted with it in one way or another. Valerian root is safe to use for any type of anxiety, physical or psychological, chronic or immediate. It calms rather than merely sedates the mind, and is useful for tremors, panic attacks and nervous sweats. It is a useful sedative for relieving tension and irritability. Valerian root – often used in combination with skullcap – is safe, non-addictive, non-habit forming, and does not produce a sedative “hangover”. Offering mild pain relief, valerian has also been used internally for the treatment of hives and shingles.

When used for insomnia, valerian promotes normal sleep patterns without interfering with REM sleep. Valerian can also be combined with chamomile, California poppy, lemon balm, passionflower herb and/or hops for a compound remedy. Chronic insomnia associated with sleep apnea or involuntary limb movements need further investigation as to the cause, but for occasional use it works very well. Valerian can safely be given to very distressed children, especially combined with lemon balm, but is generally used for teens and adults. A warming herb, valerian root is valued as an anti-spasmodic, and makes a great PMS ally. These types of herbs relax the autonomic nervous system (the primary mechanism in control of the fight-or-flight response) but not necessarily the central nervous system (the information coordinator, i.e. the brain and spinal cord), therefore valerian can help relax muscles without turning you into a zombie. It has an affinity for relaxing the musculoskeletal system (as well as the digestive system, helping to ease colic). It can help reduce shoulder tension and other muscles held tight for too long, perhaps from sitting at a computer desk. And it helps relieve muscle spasms, including those of the uterus.

Valerian root contains GABA – gamma-Aminobutyric acid – a neurotransmitter responsible for keeping your brain cells from freaking out and for the regulation of muscle tone in humans – which helps ease tension and also makes for a headache remedy. Valerian has also been used to help control seizures.

Listen to your body… Valerian can sometimes cause a stimulating effect! Called a paradoxical reaction, this may not be the herb for you if you are already an adrenaline junkie with an active constitution. It’s kind of like people who can drink a cup of coffee after supper and still go to sleep afterward, except the opposite. We have Valerian Root Tincture available here at The Wild & Weedy Apothecary. It is made from organic dried root at a 1:5 – 50% strength. That means we use 1 part dried root and macerate it (fancy herbalist word for soak) it 50% organic grain alcohol/50% pure water. Dosing for adults is as follows, and you can always adjust to how you respond – perhaps you can use less, perhaps just a little more will work better.

PMS, migraine – 1 dropperful 3x day, or as needed (excessive dosing may cause drowsiness)

Do not combine with other (prescription) sedatives. Use during pregnancy and nursing is indicated, but check this out with your health care provider first to be sure.

Cats sometimes like valerian, which is enough of a recommendation for some people. They know how to relax, that’s for sure.

We also stock tinctures of all the other herbs mentioned in this article, at the same cost as Valerian root, and can make custom formulas to your specifications or ours. Please contact us at wildnweedy@frontier.com for availability and pricing. All orders are shipped via USPS at actual shipping cost.